Marie-Luce Chevalier et al，Late Quaternary Extension Rates Across the Northern Half of the Yadong‐Gulu Rift: Implication for East‐West Extension in Southern Tibet

The presence of ~NS‐trending rifts within the Tibetan Plateau attests that it is undergoing ~EW extension. In southern Tibet, the total extension rate, distributed across seven main rifts over a distance of ~1,000 km, has been inferred to amount to about half of the shortening rate across the Himalayas. Quantifying the late Quaternary extension rates across the largest rift (Yadong‐Gulu rift [YGR]) is important to understand Tibetan deformation and to discuss the high plateau evolution during the later stages of continental collision. We performed 10Be surface‐exposure cosmogenic nuclide dating of 57 samples from three fluvial surfaces and two moraines that are vertically offset by the normal faults bounding the northern YGR. After carefully assessing individual ages at each site, to elucidate scatter in the age distributions, we obtained ~EW extension rates of up to 3–6 mm/yr near the northern end of the rift (Gulu) and of only 1.3 ± 0.3 mm/yr in the south (Yangbajing). The fast rates in the north may be influenced by dextral slip along the Beng Co fault, whose rate ought to be at least 6.0 ± 1.8 mm/yr. The total late Quaternary extension rate of 9 ± 2 mm/yr we infer across southern Tibet between ~81°E and 92°E, assuming similar rates across each rift, is similar to earlier, qualitative inferences and consistent with recent geodetic results. Distinct deformation rates north and south of the Bangong‐Nujiang suture may reflect significant differences between the extensional kinematics and mechanisms across the Qiangtang and Lhasa blocks. 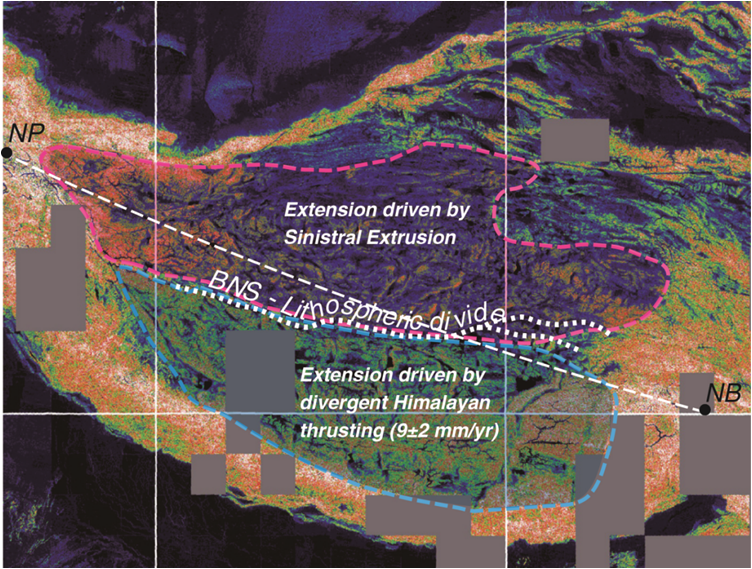